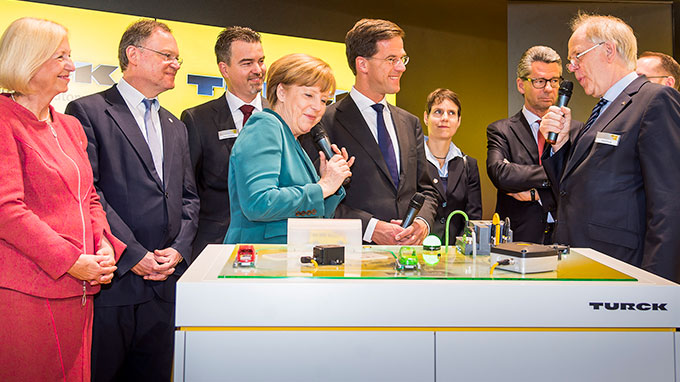 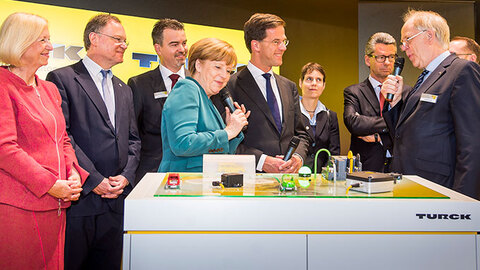 07/14 - German Chancellor Dr. Angela Merkel and the Dutch Prime Minister Mark Rutte inform themselves on the Hannover Messe about Turck

Mülheim, April 7, 2014 – In the context of her touring at the Hannover Messe 2014, Federal Chancellor Dr. Angela Merkel visited the new stand of the automation specialist Turck. Together with the Dutch Prime Minister Mark Rutte the Federal Chancellor informed herself from first-hand about the topic of RFID. The guests were welcomed by the managing directors Ulrich Turck and Christian Wolf.

Ulrich Turck demonstrated the politicians the importance of RFID technology for the industry-4.0-idea of an intelligent factory. Turck explained the increased demands of identification solutions and their seamless integration by way of the successfully implemented and highly innovative projects in the automotive sector. Only with a high-performance complete package that transmits the production data from the field level up to the MES (Manufacturing Execution) and ERP (Enterprise Resource Planning) systems, can intelligent self-controlling factories become reality, said the entrepreneur. "Our success is based on our clear commitment to Germany as the development and production location and the resulting innovation drive. In order to go ahead here too, we already have and will be investing almost 40 million euros in new production and administration buildings at our four locations in Germany between 2012 and 2015, Turck concluded.