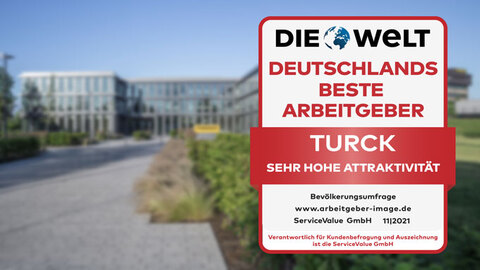 Turck employees mostly recommend their employer to other people

Turck is one of the best employers in Germany. This was the result of a study by daily newspaper “Die Welt” in cooperation with the market research institute ServiceValue. Over 820,000 participants assessed a total of 4,009 German companies with regard to their image and their attractiveness as employers. Turck was rated highly among those companies in the sector receiving an above average ranking. The result confirms the excellent employer culture at Turck, which has already received multiple awards.

In cooperation with “Die Welt” the Cologne-based research institute ServiceValue analyzed the attractiveness of German companies in extensive national surveys of the population. The latest survey asked over 820,000 men and women for their assessment of 4,009 companies with regard to their attractiveness as employers. “Germany's Best Employer” presents the results in rankings. The aim of the survey was to determine which employers are perceived as genuine and trustworthy.